Interview with Willard B. Crichton and Patsy Crichton, 1985 March 6 [audio](part 2)

Next
Interview with Willard B. Crichton and Patsy Crichton, 1985 March 6 [audio](part 2)

Interview with Willard B. Crichton and Patsy Crichton, 1985 March 6 [transcript] 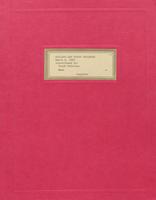