Next
Interview with Joseph and Mary Todd Kauss, 1981 February 17 [audio](part 2) 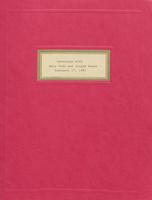