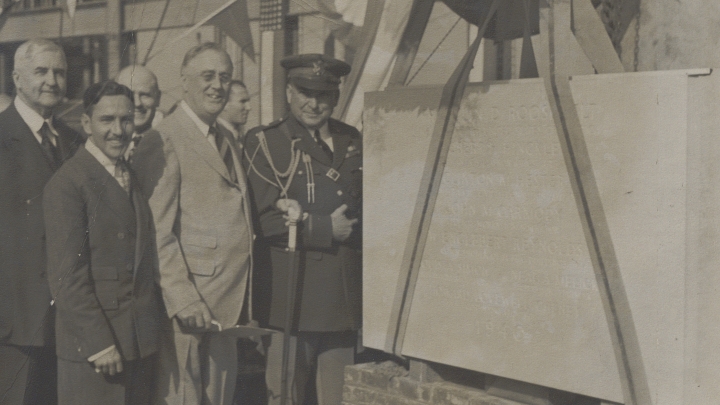 John McShain (1898-1989) was a Philadelphia and Washington, D.C.-based building contractor, whose firm, John McShain, Inc., was by 1950 one of the leading construction firms in the United States. In 1939 he received the contract to build the Franklin D. Roosevelt Library at Hyde Park, New York. During the 1940s and 1950s McShain became one of Washington's most visible and successful building contractors. His projects included the Jefferson Memorial (1939), the State Department Building (1940), National Airport (1941), the Internal Revenue Building (1942), the Pentagon (1943), the Army Map Service Building (1943), the White House renovation (1950-1951), the John F. Kennedy Center for the Performing Arts, and the National Shrine of the Immaculate Conception. The collection contains graphic materials documenting John McShain's family life and personal interests, his career as a building contractor, and his involvement in horse racing. This digital collection contains a small selection of images from the photograph collection, as well as a copy of the John McShain, Inc. booklet, Thirty years of building progress, highlighting the company's more notable building projects. For a detailed description of the entire collection, click here to view the finding aid.

John McShain as a student at LaSalle College High School

John McShain standing in front of the White House

Sister John Mary McShain with her parents, John and Mary

McShain family going through the Gap of Dunloe, Ireland

The Lakes of Killarney