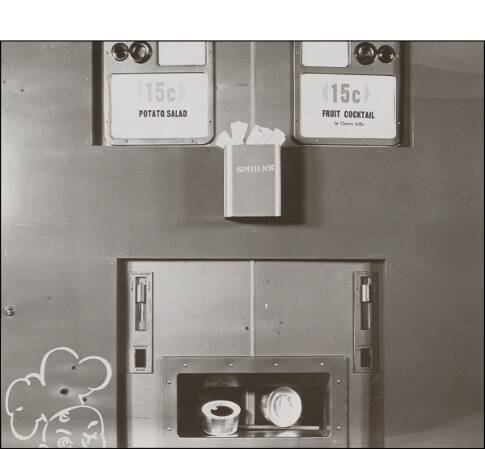 Automatic Merchandising Company operated and installed vending machines. A signature product was the Auto-Snak, a set of food vending machines which dispensed soda, coffee, milk, sandwiches, soup, salads, pastries and ice cream. These automat style vending machines emerged in America after the invention of the first coffee vendors in 1946 that allowed for the use of vending machines for coffee breaks, cutting needed catering staffs in large factories.

The images show close-up views of products such as Pepsi-Cola, Dad's Root Beer, Campbell Soup and others. There is also an article about the Budd plant installing the machines and a report about solving issues related to feeding employees. The promotional album is from the Detroit Branch. The contents have been removed from the album for preservation, but the original order of the album has been maintained.

A Report to Management: Solving the Problem of In-Office Feeding