TODAY IN THE HAGLEY VAULT... 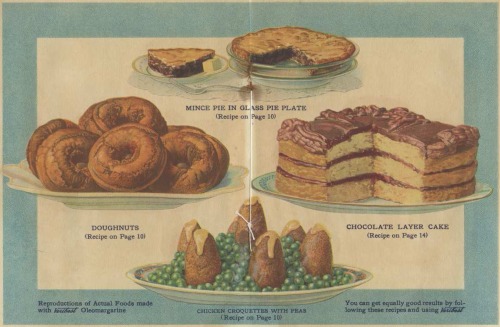 This post is for all of you out there feeling like a snack this #FoodieFriday. This mouth-watering centerfold comes from Armour’s Veribest Oleomargarine, a 1918 pamphlet from Armour and Company.

Better Living was a Du Pont employee magazine created and published by the company's public relations department. The magazine, which began publication in 1946, featured the company's popular advertising slogan "Better Things for Better Living...Through Chemistry." In keeping with this branding, its issues featured photojournalistic essays celebrating Du Pont products' contribution to improving American standards of living, features depicting Du Pont employees at work and at leisure, updates on Du Pont activities at home and abroad, and articles extolling free market values and the role of citizen consumers in postwar America.

This digital collection includes issues of Business Screen Magazine, a publication for industrial filmmakers, from 1938 to 1973. Hagley would like to thank Rick Prelinger for his generosity in making this resource available to us. Image: Main studio from the control room at Motorola's Semiconductor Products Division in Phoenix, Arizona, from "The Case for Kines" by Ralph Costlow in the September 1969 issue of Business Screen.

Chamber of Commerce of the United States photographs and videos

The Chamber of Commerce of the United States of America formed in 1912 with the purpose of advising the government on issues facing industry and business throughout the country. The majority of images in this digital collection are photographs that were taken for the Chamber’s publication, Nation’s Business. Published from 1912 to 1999, the monthly magazine proved invaluable in communicating the Chamber’s messages to business and government, and the magazine featured images by many of the country’s most prominent photographers. This collection has not been digitized in its entirety. To learn more about the photographs from Nation’s Business, visit our online exhibit, 100 Years of Picturing the Nation's Business.

Chamber of Commerce of the United States photographs and videos

Cinecraft Productions was founded in 1939 by Ray Cully (1904-1983) and Betty Culley (1914-2016) in Cleveland, Ohio. Ray Culley served as president of the company and producer on many Cinecraft films until his retirement in 1970. During his tenure, Cinecraft specialized in commercial productions for business, industry, trade organizations, and, in some cases, government agencies and social service organizations.

This collection of films and commercials documents the research, development, training, safety measures, products, and promotional aspects of DuPont Company history. The moving images include commercials, short films, feature films, and television programs. The collection has not been digitized in its entirety.

Herbert Harwood Jr. Railroad and Transportation Collection of photographic negatives comprises nearly 150,000 images covering all of the twentieth century. The collection includes Harwood’s own work as a railroad photographer as well as the work of others. Among the collection are photographs from many notable photographers active in the 1930s and ‘40s and well as the work of his father-in-law, George M. Beischer, who served as the chief mechanical officer for several railroads, including the fledgling Amtrak in the 1970s. The collection is currently being processed. Image: Aerotrain in Pittsburgh, Pennsylvania, 1956(Herbert H. Harwood, Jr.).

MCI Communications Corporation (MCI) was a large telecommunications company. It was organized in October 1963 in Joliet, Illinois as Microwave Communications, Inc. The collection has not been digitized in its entirety.

This collection of moving images documents operations at the Midvale Steel Plant in the Nicetown section of Philadelphia circa 1919.

The publication of the United States Chamber of Commerce. All issues from 1914 to 1999 have been digitized.

Organized in Ohio in 1895 with the goal to protect American goods from foreign competition and to promote trade expansion, the National Association of Manufacturers (NAM) continues today as the largest manufacturing association in the United States. This digital collection contains a selection of images primarily dating to the 1960s and 1970s. The collection has not been digitized in its entirety. Read more about the collection on the NAM Project News site.

Over half the mushrooms in the United States are grown in and around the town of Kennett Square, Pennsylvania, which proudly calls itself the mushroom capital of the world. This oral history collection brings together interviews with individuals whose experiences capture the many different kinds of work and knowledge involved in mushroom cultivation, harvesting, packing, distribution, and marketing, and how those processes have changed over time.

Incorporated in 1846, the Pennsylvania Railroad Company became the largest railroad in the United States in terms of corporate assets and traffic from the last quarter of the nineteenth century through the mid-twentieth century. This collection of more than 5200 negatives from the official Pennsylvania Railroad files largely depict PRR trains, tracks, equipment, and facilities. The collection also contains numerous views of similar facilities and equipment on other railroads, of nearby buildings and properties, or of standardized equipment and accessories that were collected by the PRR for reference. The negatives were digitized to positives for online access. Most of the digital images seen here are black-and-white, low resolution copies produced from the original negatives. Image: Locomotive 3535.

A selection of items from a collection that documents Sperry's UNIVAC Division and predecessor organizations including the Remington Typewriter Company, the Rand Kardex Company, and the Sperry Gyroscope Company. The content of the digital collection primarily includes product images of computers from the 1950s to 1970s. The collection has not been digitized in its entirety. Image: UNIVAC 9300 system.

‘Sponsored film’ defines a variety of motion picture productions funded by businesses, organizations, or governments that dictated the point of view, audience, and intent of the film. Industrial or business films are a sub-genre of sponsored films with content that marketed products and ideas, touted a particular company or industry, trained employees, and explained manufacturing or transactional processes around the creation and sales of products and ideas. The Sponsored and industrial motion picture film collection at Hagley is an artificial collection compiled by curators that includes single motion picture films or small sets of films acquired via purchase or donation. This collection has not been digitized in its entirety. Image: Still from "Fountain of Happiness" sponsored by the Weber Dental Manufacturing Company, circa 1950.

William Rau (1855-1920) was a Philadelphia-​based photographer, and a significant figure in the world of American photography in the late 19th and early 20th centuries. He was well known for his series of stereo cards of scenic views from around the world, as a sought-after portrait photographer for Philadelphia's elites, and as an official photographer for the Pennsylvania Railroad, the Louisiana Purchase Exposition in St. Louis, and the Lewis and Clark Exposition in Portland. In 1895, the Lehigh Valley Railroad hired Rau as the company's official photographer to document scenic views along the railroad's route. To complete this mission, Rau traveled by rail from New York City to the Lehigh Valley in Pennsylvania and upstate New York in a customized passenger car equipped with a darkroom and other essential equipment. Over two hundred images from this appointment would later be placed in Lehigh Valley Railroad terminals and public sites along the railroad’s reach. This collection consists of lantern slides. While many of the lantern slides in this collection are undated and only partially identified, most can be definitively identified as originating from this 1895 appointment.